Seth Hill put together this nice chart showing just how difficult a task Speaker Pelosi faced in keeping the coalition in support of health reform together.  The solid line shows the ideological distance between the House party medians.  The dotted lines mark the distance between the 5th and 95th percentile members of each party in terms of ideology. 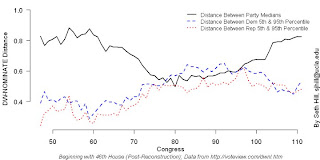 What we see, unsurprisingly, is that the distance between the two parties was relatively low from the 80th congress through the 95th (1947-1979), but the two parties have moved further apart from each other since then to historic highs.  At the same time the parties were closer together, they were more divided internally, but they have become more ideologically cohesive since then.

Interestingly, while polarization between the parties is high today, the parties still don't seem nearly as internally coherent as they were at the turn of the 20th century.  So given the state of polarization, there was no reason for Pelosi to expect any Republican support on health care or any other major piece of legislation.  But she also had to hold together a pretty diverse coalition, ranging from Rep. Barbara Lee of California (the most liberal House member) to Rep. Joe Donnelly of Indiana (the most conservative aye vote).  Not an easy task.

Reid was pretty awesome too, just a lot less stylish.