To what extent are Republican insiders managing to coordinate on a candidate for the presidential nomination? There have been a few gubernatorial endorsements (Heineman is backing Romney, for example), and there's some evidence that insiders have already knee-capped Palin, but for the most part it's hard to discern just who the insiders' preferred candidate is or how they're helping him or her.

But before you lose faith, be sure to check out this fascinating post from Adam Bonica and Kevin Collins (via the Monkey Cage). Bonica and Collins use campaign donations to assess candidates' ideology (here's a PDF chapter from Bonica explaining just how he goes about doing that) and then compare those ideology scores with the percentage of all the candidates' donations that were at the sub-$500 level. That produces this chart (Some former candidates are included in there to give a sense of scale.): 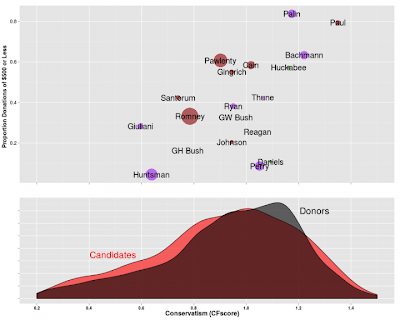 Note what the graph shows: the more conservative the candidate, the greater the percentage of his/her donations coming at the sub-$500 level. What does this mean? Well, consider how elites donate --- usually at the highest possible level. Those who give at lower levels are probably enamored of a particular candidacy in a particular year but aren't that central to the party. So this chart suggests that elites seem to be coordinating on the more electable (moderate) candidates and freezing out the less electable (extreme) ones.

This is hardly iron-clad proof of coordination, but it's consistent with a party that sees the 2012 election as difficult but, given the shaky economy, potentially winnable with the right candidate.
Now, of course, there's always a balancing act: insiders want someone electable, but they (usually) aren't willing to give up everything they stand for. Judging from the above graph, Huntsman seems to be doing well among elite donors, but he may prove to have just too moderate a set of stances. Romney, if anyone, looks to be in the sweet spot.