No American president since Franklin Delano Roosevelt has won a second term in office when the unemployment rate on Election Day topped 7.2 percent. Seventeen months before the next election, it is increasingly clear that President Obama must defy that trend to keep his job.

I feel a scatterplot coming on... 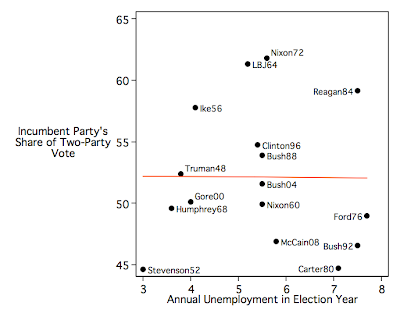 Well, let's for a moment ignore the obvious problem with Appelbaum's claim: Reagan won reelection in a landslide with annual unemployment at 7.5 percent. (I'm assuming Appelbaum is working with monthly or quarterly data or something.) The fact is, as the above scatterplot demonstrates, the unemployment rate does not predict presidential elections at all. The Democrats failed to hold the White House in 1952 during the lowest unemployment on record. Parties have both lost and retained the White House during periods of high unemployment. And the biggest reelection margins have occurred with unemployment between five and six percent -- right around the middle of its historic range.

Of course, what will matter far more for Obama's reelection prospects is how personal income grows between now and next summer. But the nation's unemployment status by itself is not going to affect Obama's.