More on unemployment and presidential elections

Carlisle Rainey, a poli sci and statistics graduate student at Florida State, has written a response to my earlier post in which I argued that there was no relationship between unemployment levels and presidential election results. Carlisle's post is definitely worth a read. His main objection to my argument is that there are only 16 elections since WWII on which to draw conclusions. It is possible, he says, that there is an important relationship between unemployment levels and election outcomes, but we just can't detect it because we have so few observations.

This is certainly a valid concern. Unfortunately, those are the data we have. Now, we can look to other elections, as well -- notably, unemployment levels don't seem to affect congressional elections, either -- but if our concern is specifically over presidential elections, we're limited to very few cases.

And perhaps it's incumbent on me to revise, or at least recast, what I said a bit. I wasn't so much trying to argue that unemployment has nothing to do with elections as I was trying to call out journalists who seem to think unemployment has everything to do with elections. If you're going to argue that Obama is in trouble because the unemployment rate will be above 7.5% next year, you really need to deal with the fact that some very easily obtainable data do not support that claim. Reagan won in an historic landslide during a time of very high unemployment, while the Democrats lost control of the White House in 1952 during the lowest unemployment on record.

Interestingly, Carlisle drills down into the data a bit more, finding an important trend if you isolate just those elections in which the president had been previously elected: 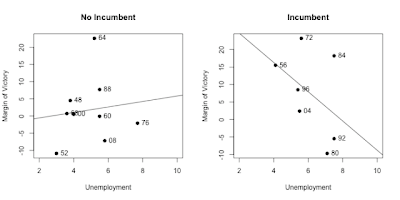 Nice catch. And there's a plausible story there, suggesting that voters hold incumbents accountable for unemployment rates but not necessarily parties. (The trend would still hold if you counted LBJ '64 and Ford '76 as incumbents.) My one concern would be that if 16 elections are too few to make good inferences, we should be even more concerned about seven. Also, as Brendan Nyhan points out, we have plenty of measures, like the growth in real disposable income, that explain elections quite well whether or not there's an incumbent running.

All in all, Carlisle has written a thoughtful post about the use of statistics in elections. I look forward to reading more on his blog.