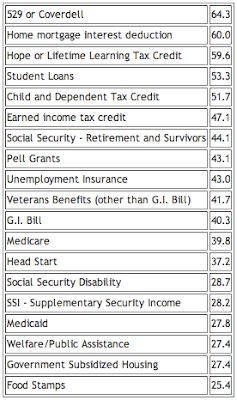 The point here is not that Americans are stupid or uninformed. It is just that most of these programs are designed to be invisible. Many Americans are distrustful of government, for example, but the government nonetheless wants to encourage home ownership. So rather than create a federal bureau that hands middle income people homes, it tinkers with the tax code to allow people to take a tax deduction on their home mortgage interest. That program will cost taxpayers more than $100 billion this year, and most of its beneficiaries don't even realize that the government is helping them out.

In many ways, it's not surprising that the concept of a tax increase is anathema today -- people don't think they're getting anything for their money. In fact, they're getting quite a bit, but the government goes out of its way to hide that fact.