To follow up on my previous post on public sector unions (also see John Sides' summary of recent posts on the topic), I stumbled across this recent survey by 24/7 Wall Street of the best- and worst-run states. According to the report,


Our writers looked at hundreds of data sets ranging from debt rating agency reports to violent crime rates, unemployment trends and median income. Of those, we chose what we considered to be the 10 most important ranking of financial and overall government management.

Below is a scatterplot showing the relationship between public sector unionization and the state rankings by 24/7 Wall Street. I have plotted the latter variable in reverse order so that better-run states (those with lower rankings) appear toward the top of the graph. 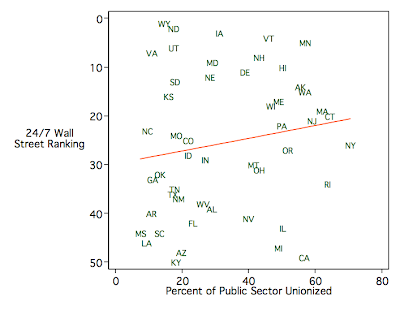 The chart suggests a modest but positive relationship between the two: greater public unionization is associated with better governance. Now, this doesn't mean the relationship is causal, and the correlation is low and falls short of statistical significance. Plus, there are plenty of other surveys of state governance out there. But I just wanted to throw this out there as possible evidence of the sort of benefits that public unions can provide, even if they cost the public more. At the very least, there's no evidence here that public unions are hurting the states.