James Battista has a piece (gated) in the most recent State Politics and Policy Quarterly examining formal and perceptual power among leaders in the state legislatures. That is, he compares an index of actual formal powers of statehouse speakers (control of the legislative agenda, appointing committee chairs, etc.) with the results of a survey of legislators about how powerful they believe those speakers to be. The result? Essentially no correlation between the two. 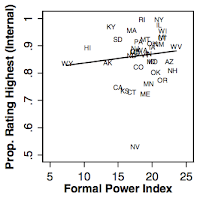 This is an important reminder that there are important factors out there determining power besides formal rules. According to the formal rules, California should have among the weakest political parties in the country; it has the strongest. Similarly, if a legislative leader is determined and clever enough, and if the political culture allows it, strong leadership may emerge, regardless of what the rules officially dictate.

I regret that Battista's analysis excluded Nebraska, as I'm curious where that state would show up in the survey.

People always leave NE out, with the assumption that the body is actually non-partisan.

I get that, but this is a study of the power of the speaker. This is generally considered a partisan office, but NE actually has a speaker. Sure, he's elected by secret ballot and isn't officially a party officer, but this doesn't strike me as a study where NE has to be excluded.

Yes, I wasn't clear. I agree with you completely. I think, however, that because of the so-called non-partisan nature of the Unicameral people just shy away from it in general, no matter what the study. And, really, partisanship is very much alive and well here. I don't think we should be excluded at all.

We're in agreement. I think the exclusion of Nebraska from some studies of legislative partisanship is legitimate, simply because the measures one would use to determine partisanship aren't easily applied in a chamber where members are officially nonpartisan. But this was a study where NE didn't have disqualifying conditions.

Jim here. I excluded Nebraska because it doesn't have a lower chamber, which is a bit of a pickle for a study of lower chambers.

The survey question specifically asks about the "Majority Party Leadership," not the chamber leadership, so I wouldn't swear that it's great for this purpose in Nebraska.

But if you buy that it is, Nebraska legislators gave their majority party leader a lower average power rating than in every other chamber. Looking at the measure in the figure you linked, it comes in 96th.

Ah, thanks for clearing that up, Jim. Yes, the Unicam has a speaker, but if the survey asks about "majority party leadership," the answer really wouldn't be very reliable or applicable.