What makes an outsider?

Like Jonathan Bernstein, I have some concerns about Nate Silver's graphical overview of the 2012 Republican presidential candidates. However, Jon focuses on the horizontal axis; I'm concerned with the vertical one, which charts insider/outsider status. Here's the graph: 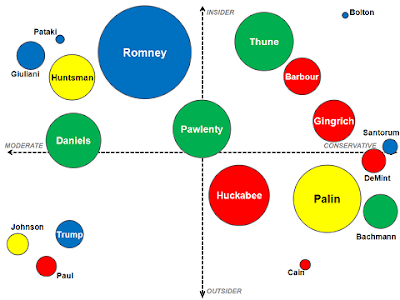 I have to admit to being a little fuzzy on this whole insider/outsider thing. So, let's see, Mitt Romney is an insider, while Sarah Palin's an outsider. Yet Palin has a show on Fox and was the most recent Republican vice presidential nominee, while Romney has worked in the private sector for years, has never served in a presidential administration or on a national ticket, was governor of a lefty state, and is a Mormon. Why is he inside and she outside?

There might be a sense in which insider/outsider status is less a function of résumé than of disposition. Palin is a bit of a bomb thrower. She occasionally insults establishment figures within the GOP and even invites challenges to their nominees in primaries. Romney doesn't seem interested in making enemies within the party; he wants to unite as many factions as possible.

Forgive my recent Nebraska obsession, but this is reminding me a bit of Democratic senators (and former governors) Ben Nelson and Bob Kerrey. Nelson is quite conservative as a Democrat, but he's generally deferential toward the party and doesn't make a lot of waves. As senator, though, Kerrey made a habit of pissing off party leaders despite being closer to the party median than Nelson. So, in some sense, Kerrey was more of a party outsider than Nelson.

But maybe we should figure out exactly what these terms mean.

If it wasn't a dirty word, a much better term for "outsider" would be "progressive" in the Teddy Roosevelt/LaFollette sense--Republican, religious, occasionally populist (esp. Palin!), but not fond of big corporations. I think liberals quickly branded Palin (who's not running for President, FWIW) a religious conservative and overlooked the finer points of her Alaska record. She took on the "regular Republican" (Gov. Murkowski) in the party primary, took on the oil companies that dominate the state economy, and is still trying to destroy the old GOP "machine" in the form of Sen. Murkowski (no, same surname is NOT a coincidence).

OTOH, Mitt Romney is a corporation man. Barbour is a lobbyist. And Giuliani...??? I hear he was mayor of New York after some major event, but I'm not sure when.

I didn't have time to give Silver's piece a careful read, but a quick skim of the linked piece or the previous iterations linked off of that explained how the space was derived or any of the usual ways the validity of a spatial mapping is explored.

Did I miss something?

"The other is what I then called an institutional axis -- whether a candidate seeks to work within existing institutions or to reform them.

I now conceive of the institutional axis as more of a populist axis. Does the candidate stress his connections within the elite, usually expressed in terms of his purported experience, competence, or technical knowledge? Or is he an "outsider" who claims to represent the people in contradiction to the elite? Is he a technocrat or a populist?"