John Sides has but together some graphs examining the relationship between the extent of unionization in the public sector and a state's debt load. I find the one reproduced below the most telling: 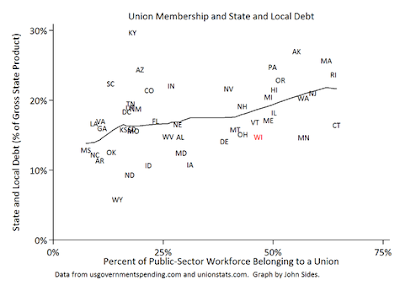 John is wise to point out that there are probably other important variables to consider here, and also that the relationship described in these plots is descriptive, not necessarily causal. The point is well taken, but let's just suppose for a moment that this relationship is causal, and that greater unionization leads to greater public debt load. Just how shocking should this revelation be?
Not very. The main benefits that union membership conveys are higher pay and improved working conditions, both of which cost the employer (in this case, the public) more. So if a greater percentage of your state's work force is unionized, you're probably going to be paying more for the labor. And since labor costs are usually contractual and not easily cut in the short run, states with greater labor costs will go into debt more quickly when revenues take a dive. This shouldn't be particularly controversial or surprising.
What the evidence above doesn't show is what citizens get by paying more for public labor. With higher pay, you can usually attract better trained workers, turnover will be lower, services will be of higher quality, etc. (By the way, the two states with the lowest public sector unionization rates -- Louisiana and Mississippi -- have the highest corruption rates.)
Sometimes good things -- even when they come from the government -- cost more. A country that devotes 1% of its budget to defense will probably have a lower debt load than one that devotes 20%, and a country that slashes education spending will no doubt see less red on its balance sheets than one that doesn't. But where would you rather raise your kids?

As for better services: voters, through their elected representatives, determine the tradeoff they want between tax level and quality of services. The presence of unions makes the choice for them. That is, if the voters wanted higher pay and consequently higher services, their representatives could ensure that, but unions make it impossible to avoid this.

Not to mention that its not clear that the best way to improve service quality is to pay more. It might be to pay the same, but hire more people; depends on the situation...

As for turnover, it seems like wishful thinking to think that employers could actually save money for themselves by paying people more.

Alex, yes, in the absence of unions, voters theoretically are free, via their elected officials, to determine how much they want to pay for their public services. It seems clear, though, that they want to pay very little for them, just as the CEO of a corporation wants to pay a minimum in labor costs. The whole purpose of unions is to raise that minimum.

California is missing from the scatterplot.