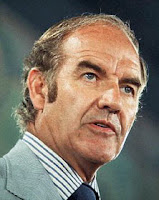 What's it like to take over a major political party? You can get a great sense of it by watching "One Bright Shining Moment: The Forgotten Summer of George McGovern." I recently showed parts of it to students in my parties class and we all found it fascinating. In particular, the coverage of the 1972 primaries and the chaotic convention that year are great and revealing. The film also does a nice job explaining the McGovern-Fraser reforms and how they affected subsequent elections.

You get a great sense of the party establishment being set back on its heels as this anti-war insurgent candidate from the middle of nowhere seems to be taking the nomination from them with a ragtag army of freaks. There's a beautiful moment where McGovern defeats Hubert Humphrey in California, which was then under winner-take-all rules (despite the reforms of the previous year). Humphrey and his party backers then try to have California's delegates retroactively allocated proportionally, involving the McGovern campaign in a distracting five-week litigation battle. Seeing McGovern defend WTA while the insiders argue for proportionality is quite delightful.

Now, the film isn't all great. It's got a pretty heavy-handed lefty agenda, suggesting that President McGovern could have rescued us from the deceit of Watergate, Iran-Contra, Lewinsky, WMDs, etc. The interviewees are kind of an all-star Hollywood liberal elite cast -- Warren Beatty, Gloria Steinem, Gore Vidal, Dick Gregory, etc. (I suppose they deserve some credit for getting Ron Kovic instead of Tom Cruise playing Ron Kovic. Then again, Kovic was probably the easier get.) And it goes off into some paranoid areas, implying that the assassination attempt on George Wallace was tied to Watergate.

But there's some rich stuff in there that really makes it worthwhile. They don't really draw the connection, but I couldn't help comparing these events with those of the Goldwater insurgency just eight years earlier. In both cases, a group of young idealists manage to take over the party and fundamentally change how the party was perceived and what it stood for, nominating a candidate who they truly believed in, rather than one they settled for. In both cases, their summer of elation ended up with historic routs for their party. That's a pretty rough awakening for the most energetic activists in both parties.

Now McGovern vs. Goldwater? That would have been fun.

This question kind of goes back to the recent debate between journalists and political scientists about campaign tactics vs. fundamentals, but the economy (and RDPI) did well in 1964 and 1972; if in either year the economy had tanked, would it not have mattered if Goldwater was far right (or McGovern was far left), regardless of their political positions?