Just to follow up on my previous post about Tuesday's Colorado Republican caucus, I've played with a bit more county-level data and found a few interesting correlations. None of these are perfect, and a lot of things are moving simultaneously, so to find the one thing that caused Santorum's upset is a fool's errand. Nonetheless, these are suggestive.

I also encourage you to read Sean Trende's county-level analysis of New Hampshire's and Florida's primaries (he finds some similar things to what I found about Evangelical voters) and Nate Silver's interesting essay today.

Anyway, some graphs after the jump. All bivariate relationships are statistically significant at the p ≤ .05 level. 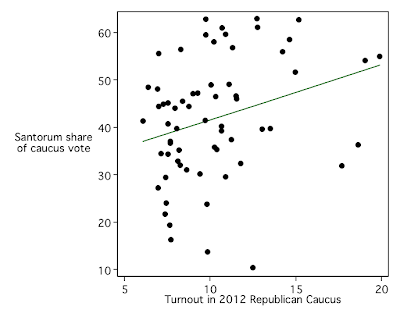 County Conservatism
More conservative counties (as measured by the 2008 general election vote) were much more likely to vote for Santorum. This correlates highly with the Evangelical vote share. 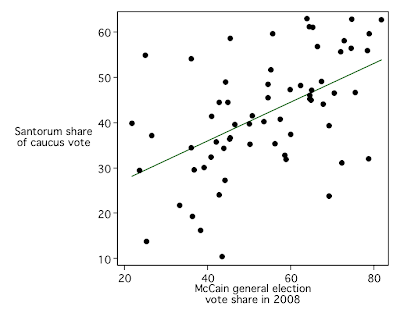 The 2010 Party Splits
Romney's caucus vote correlates highly with the 2010 primary vote for U.S. Senate candidate Jane Norton. Norton, you may recall, was the candidate with the solid resume, lots of insider support, and a huge monetary advantage whom the activist base nonetheless didn't like, and she lost to a Tea Party-backed conservative. Sound familiar? 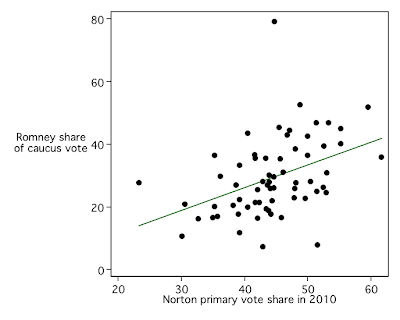 Income
At the suggestion of Kevin Ingham and Craig Hughes, here's how income related to the Romney vote: 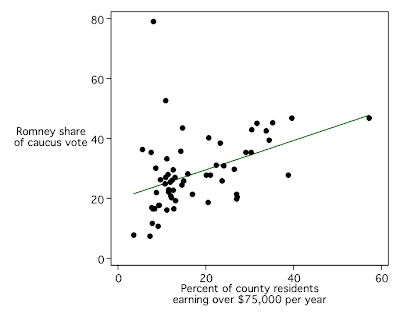 Incidentally, that one huge positive outlier for Romney is Conejos County, population 8,000, a third of whom are Mormon.

One thing that's interesting to me is the first graph showing that Santorum did better in counties with higher turnout. I would have expected the opposite, and actually thought I heard that Santorum's strategy in going after Colorado, Minnesota, and Missouri was the fact that since they were caucuses and a beauty contest that turnout was expected to be light. In fact, I think there was a letter to the editor to the Denver Post today scolding Republicans for not caucusing in sufficient numbers that suggested that Romney would have won if they had.

I think the point he made was that Romneys supporters were much less likely to caucus, BECAUSE they were less enthusiastic about voting for him. Out here in UTAH, all the arch-conservatives (who are usually Mormon) when asked about Romney, start with "I don't know..." they are just as grudging in supporting Romney as all the folks in Colorado turned out to be. The simple fact is that the Tea Party stable of presidential contenders just got elected, and they are ALL too green (or yellow) to run this time around. Santorum and Gingrich are just as bad or worse as fill ins. No one else is showing up, but the Tea party folks just can't settle for the next best thing. They are just too focused on ideological purity. Hopefully in 4 years (or 8, should Romney win the nomination and then the General) they will have some folks like who have enough experience to prevent them from fighting for pointless victories.