The Secret of Santorum's Success?

I've been mostly focusing on the Colorado results from last night's Santoruming, which, I'll admit, caught me by surprise. Those seeking to understand what happened here should begin with the knowledge that the Colorado GOP is far from monolithic. Yesterday, Micah Cohen at fivethirtyeight ran a nice geographical profile of the state's Republicans (featuring the occasional blatherings of Kyle Saunders and myself). Cohen notes that the business Republicans in the Denver metro area don't necessarily vote like the libertarian Republicans on the Western slope, who don't necessarily vote like the Evangelicals in Colorado Springs. And last night's map showed some geographic diversity, with Romney doing well in the Denver suburbs -- but not by enough -- and Santorum taking just about every other part of the state (with the exception of the sparsely-populated northwest).

So how did Santorum end up taking the state, when Romney dominated it four years ago and when Romney had the backing of an impressive array of Republican leaders, including the state's most recent Republican governors and U.S. senators and the current speaker of the statehouse?

I was curious about the role of Evangelical Protestants in the state. Here's a telling scatterplot, looking at the percent of religious adherents in each Colorado county who are Evangelicals and Santorum's caucus vote share: 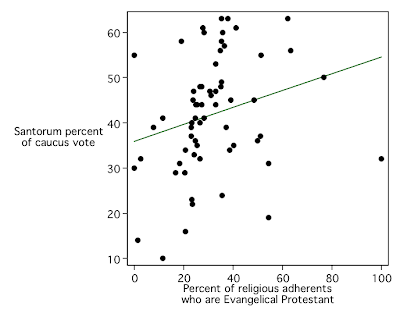 And yes, that regression line is statistically significant at the p ≤ .05 level. I know the data are a bit noisy -- chalk that up to caucus results in small counties, where sometimes only a few dozen people actually turn out to vote.

Below is a multivariate regression equation in which I use the percentage of Evangelicals, Catholics, and Mormons to predict Santorum's county-level share of the caucus vote in Colorado. I also include a variable measuring whether there was a Tea Party organization in the county in 2010. The only predictor that is statistically significant is the Evangelical percentage:

Meanwhile, here's the same regression predicting Romney's share of the caucus vote. The Evangelical variable is just on the edge of significance, suggesting that the more Evangelicals, the lower the Romney vote. Conversely, the more Mormons, the higher the Romney vote. No, I cannot explain why the Tea Party variable is positive and significant here. This may be spurious, or it may indicate that Tea Partiers who were not Evangelicals backed Romney:

Again, these are county-level data, which may not be the best level to examine such questions. Nonetheless, what does this mean going forward? Is this evidence that Evangelicals will not accept Romney due to his religion? Or that Romney supporters lack the enthusiasm to seal the deal? I noticed this interesting tweet from David Leonhardt this morning:

Romney still has what his rivals lack: the money and institutional backing to be competitive everywhere at the same time. We'll see evidence of that on Super Tuesday. Gingrich and Santorum may continue to make him bleed, but I still don't see how either of them deprives him of the nomination.

Parsing out the data myself, almost all of the Romney votes are in metro Denver or resort oriented counties, with the exception of a couple on the Utah border.

I suspect that the most powerful variable could be the weighted average of population density at the finest level of detail possible. Thus, if the average Republican's census block in a county has a high population density, he will probably vote for Romney or Paul, while if it is lower he will vote for Santorum or Gingrich. Mormon population percentage would explain the two outliers.

Within the "moderate" v. "liberal" variable the Paul vote (which is strongest in the mountain towns) might track libertarian electoral performance in the last general election. The Santorum v. Gingrich vote in each is probably succesible to being modeled as a constant ratio since the flukes where Gingrich did better than Santorum are quite low in population.

Population density is a powerful predictor of position on the liberal to conservative dimension, probably better than religious belief (which your scatterplot shows to have totally the wrong slope) but is hard to measure in Colorado at the county level because what matters is immediate population density which is impossible to discern at the county level in resort communities.

Awsome info and right to the point. I am not sure if this is actually the best place to ask but do you people have any thoughts on where to get some professional writers? Thanks in advance :)
Disney Tangled Saucer Chair

You can certainly see your expertise within the paintings you write. The sector hopes for more passionate writers such as you who aren't afraid to say how they believe. All the time go after your heart.
Sorel Women's Cate The Great Boot