If parties are networks, where exactly do 527s fit in? Are they out on the fringes, running messages inconsistent with what the party leaders and candidates want? Or are they highly central to the party networks, doing the work that the more formal branches of the parties are prohibited from doing?

Richard Skinner, David Dulio, and I investigate these questions in a new paper that just came out in American Politics Research called "527 Committees and the Political Party Network" (PDF, ungated). The way we approached this was by collecting a dataset consisting of all the employment records of the 100 most active 527s between 2004 and 2006. We then researched these employees' backgrounds to find out where else they have worked. Then we constructed a network using the employment ties between different organizations. The chart below shows all the groups that were linked to the liberal 527 America Coming Together via shared employees: 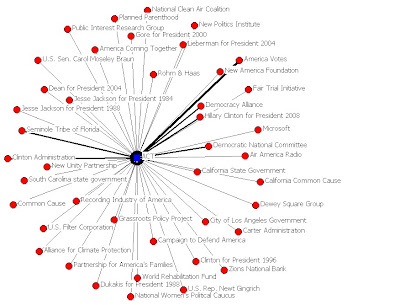 The network analysis finds that 527s are closely tied to the party networks, assisting them in coordinating messages across different groups. The study also suggests that 527s played a particularly important role for the Democratic Party during this period when Republicans held control over the Congress and the White House: they were a place of employment for key Democratic staffers until their party could return to power.

Question unrelated to the paper content: how did you get the ungated link from APR? Ray La Raja and I just got a hit there and weren't ever offered such a thing from the editor. Nice to have to promote the piece...

I think that's the first cite to my dissertation. Cool!

I enjoyed reading your postt