Does primary turnout tell us anything about the general election?

Sean Trende had a nice piece a few days ago pondering the question of whether the relatively low turnout in Republican primary contests so far (compared to 2008) portends ill for the Republicans in November. Does this mean that Republicans are unenthusiastic this year and won't turn out for their nominee?

I think Trende is right that turnout in primaries is more a function of the level of competition within the party that year rather than an omen for the general election. But unfortunately, he only uses total numbers of voters in those primaries to analyze the question. I used his table and combined it with estimates of voter party affiliation and total numbers of registered voters to generate an indicator of voter turnout in out-party primaries. This allows us to address the question of whether turnout in the primaries of the party not currently in control of the White House affects the vote share in November. Here's a scatterplot (the points are labeled by the candidate of the incumbent party): 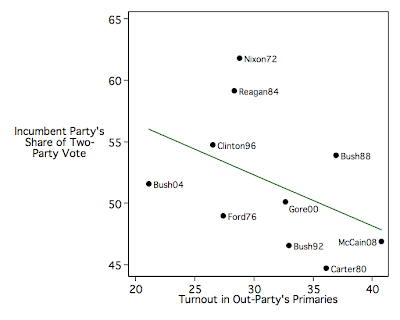 The results above suggest a negative correlation, implying that lower participation in out-party primaries is associated with a higher vote share for the incumbent party's candidate. For this year, that would mean that if Republican primaries are really suffering from low turnout, that would favor Obama.

Interesting work. One other thing I think you would want to control for is how many weeks the primary goes on for. Like I said, if Obama had put Hillary away in New Hampshire, or if the primary/caucus order had been different and Hillary had followed Super Tuesday with big wins in PA, OH, WV, KY, etc., I don't think turnout would have been as high overall. Of course, this is tricky, because you have to figure out a way to account for people like Huckabee who kept competing well after everyone knew that McCain was the nominee . . .

I also wonder about the causal relationship here. If we assume quality candidates are strategic, they'll wait for good opportunities to run (i.e. against weak incumbents/in open seat years), which could lead to more competitive primaries and higher turnout. The 2012 Republican field appears to complicate that assumption, however...

Thanks, Sean. I think you're right about the competitiveness and duration of the primary contests. I doubt there's a direct causal relationship between primary turnout and November results. If the economy is weak, that may encourage more high quality candidates to enter the out-party primaries, which could expand competition and lengthen the race, increasing turnout. I don't have a sense yet of where 2012 will fit in. If Newt drops out before Super Tuesday, turnout will take a hit, but I can't believe that makes Obama's reelection easier.