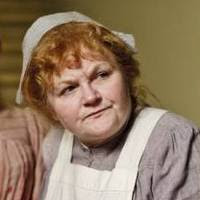 I was interested to follow the story of Mrs. Patmore, the house chef in "Downton Abbey," (which, if you're not watching, you really should be). Toward the end of season 1, Mrs. Patmore was losing her vision to cataracts, to the point where she was making dangerous mistakes in the kitchen. Rather than fire her, her employer sent her to London for surgery, and she eventually returned able to see. What exactly was the procedure for dealing with cataracts in 1914?

I checked in with the closest available source: my father, an ophthalmologist. He informs me that cataract surgery was regularly done back then, but it was a pretty barbaric procedure compared to how it's handled today. There were no implants to replace the lenses, so doctors simply removed the clouded lenses and fitted the patient with thick glasses. Even this was usually an improvement over advanced cataracts, which blocked out most light. But the procedure of removing a lens from an eye was very dangerous: there were no sutures available for stitching up the eye post-operatively, patients had to remain perfectly still for weeks afterwards to allow the eye to heal (held in place by sandbags), and the chances of infections and other complications were very high. Nonetheless, Mrs. Patmore's prognosis was certainly possible, although if she's walking around without glasses in season 2, that will be a bit surprising.

Meanwhile, as a followup, where did lens implants come from? According to my father, it had to do with World War II ball turret gunners on bomber aircraft. It was common for the gunners to be hit by shards of the plastic from which the ball turrets were made, and occasionally these shards would wind up in the eyes of the gunners. Doctors at the time found that the eye was remarkably tolerant of the plastic shards and few infections developed. It was later theorized that such plastic could be molded into a replacement lens for cataract patients.

As ever, Seth, you are a font of information, both political and otherwise.

There are many types of disease which can cause many problem in eye and Ophthalmology is a surgery which can protect against serious disease.

Wonderful post! You give the entire principles about the player and player ought to pursue these tenets and student can visit page to get unique task. I didn't comprehend these guidelines since I didn't think about the idea of these tenets.

Thanks for all the tips mentioned in this article!

I really happy found this website eventually. Really informative and inoperative, Thanks for the post and effort! Please keep sharing more such blog.

I really happy found this website eventually. Really informative and inoperative, Thanks for the post and effort! Please keep sharing more such blog.