Nate Silver has updated his election forecast models based on current assessments of the Republican candidates' ideological positions and the status of the economy. The numbers look substantially better for Obama since the last time Silver drew up these calculations. There are still legitimate reasons to quarrel with Silver's estimates of candidate ideology (especially the conclusion that Gingrich and Santorum are equally conservative) and of the impact of ideology on an election, but he's notably being a lot more transparent about the methods this time around.

Anyway, I've updated my chart of the forecasts based on Silver's numbers, assuming Obama has a 50% approval rating: 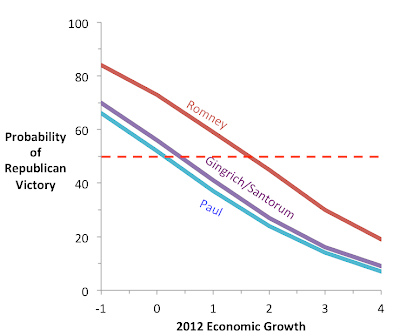 What software did you use to create the chart? It looks really sharp.